A Tribute to Jack Hardy with All-Star Lineup to Be Released March 11, 2016 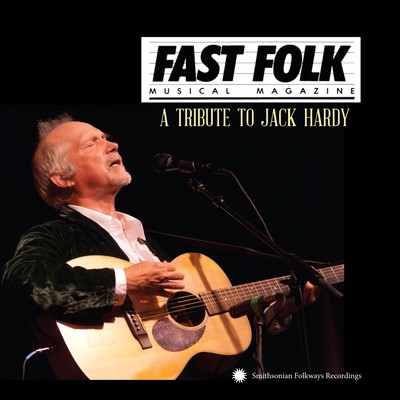 A Tribute to Jack Hardy will be released on the fifth anniversary of the esteemed singer-songwriter's death, March 11, 2016.

The late Jack Hardy, an influential folk singer-songwriter and founder of the Fast Folk record label and magazine, was a firm believer in the power of song as a form of communication. For him, folk music was more about the lyrics and the melody than the singer. "As a songwriter," he said, "I'm only as good as my latest song."

In honor of the fifth anniversary of his death, Smithsonian Folkways presents A Tribute to Jack Hardy, featuring 26 previously unreleased recordings of Hardy's songs by an illustrious group of performers, all of whom cited Hardy as a key influence and a personal friend. The album will be available in on-demand double CD and digital downloads via folkways.si.edu as well as all major digital outlets.

Watch Video for "Ponderosa" from A Tribute to Jack Hardy: https://youtu.be/eVPUkcF9MVo

For the album, Dann and Massengill compiled more than 100 pages of liner notes that include Hardy's "Songwriter's Manifesto," complete lyrics, photos, and personal tributes, anecdotes, and essays from the participating singer-songwriters.

Picking up the guitar as a teenager in the 1960s in Colorado, Hardy's early repertoire consisted of The Everly Brothers, The Kingston Trio, Bob Dylan, and The Beatles. But much of his writing style can be attributed to his love for literature. The poetry of William Butler Yeats especially influenced Hardy's songwriting style, which is characterized by vivid imagery and literary techniques.

After moving to Greenwich Village, New York City, to pursue a career as a singer-songwriter, Hardy created the Songwriters Exchange, where musicians shared a new song weekly. The group, and resulting concert series, attracted established performers, such as Griffith, Vega, John Gorka, and Shawn Colvin, as well as aspiring amateurs. Known both for the constructive songwriting advice and the enormous bowls of pasta he would serve up, Hardy became a sounding board, mentor, and friend for a generation of NYC folksingers. In 1982, Hardy, with the help of Dave Van Ronk and others, founded Fast Folk, a record label and music magazine that featured hundreds of singer-songwriters on 98 albums released during a 15-year run (now part of the Smithsonian Folkways collection).

While he never reached the commercial success that some of his weekly guests achieved, Hardy was a prolific songwriter and released 21 albums in nearly 30 years before he died of lung cancer in 2011 at age 63.

"Everything about writing is a process. It is a process that one must immerse oneself in to be good," said Hardy. "We have to stop getting hung up on the song itself, as an end in itself, and pursue the process."

In the liner notes, the performers repeatedly cite his valuable perspective on songwriting and give generous thanks for his passion, bravery, stubbornness, determination, and encouragement.

In addition to this tribute, the 36-track compilation Fast Folk: A Community of Singers and Songwriters is available from Smithsonian Folkways and includes songs by John Gorka, Suzanne Vega, Dave Van Ronk, and many more. 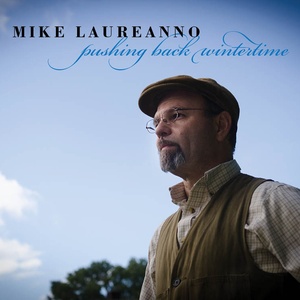 Mike Laureanno, a singer/songwriter who also played bass and sang high harmony with Jack Hardy for years, has just released a new CD, Pushing Back Wintertime. Among the twelve songs is one written for Jack, "Let Go." The CD is available through CD Baby.

Sheila Mac Donald's new CD, "Half Light," includes a cover of Jack's song, "The Black Hole." She has also dedicated the album to Jack's memory. It may be purchased through CD Baby.

T Shirts, which sold briskly at the 2011 Falcon Ridge Folk Festival, are available while supplies last. The cost is $15 each, including shipping. They may be ordered by sending a check for the total amount made out to MORGAN HARDY and mailed c/o 763 Briscoe Road, Swan Lake, New York 12783. SPECIFY SIZE(S) DESIRED. The colors are jade (Medium), pale blue (Large), and "Texas orange" (Extra Large). For more information, e-mail Angela Page at: folkplus

Jack's CDs will be offered for sale at a booth at the Falcon Ridge Folk Festival, July 22 through 24, 2011, in Hillsdale, New York. Some of his recordings have been reduced to limited numbers, so those interested in acquiring them on fixed media (CDs with printed inserts and lyrics, etc.), are advised to buy them now.

Posters from Fast Folk shows betweens 1985 and 1999 will also be available at the Jack Hardy Booth. Some of the posters are signed by all of the performers. Use the link at the beginning of this paragraph for details and images of the available posters.

Angela Page's radio special on Jack Hardy, which was first broadcast on March 26, 2011, on WJFF-FM, is now available on CD. Below is an outline of the special program, with voices from his life and 15 partial or total songs from his huge repertoire. 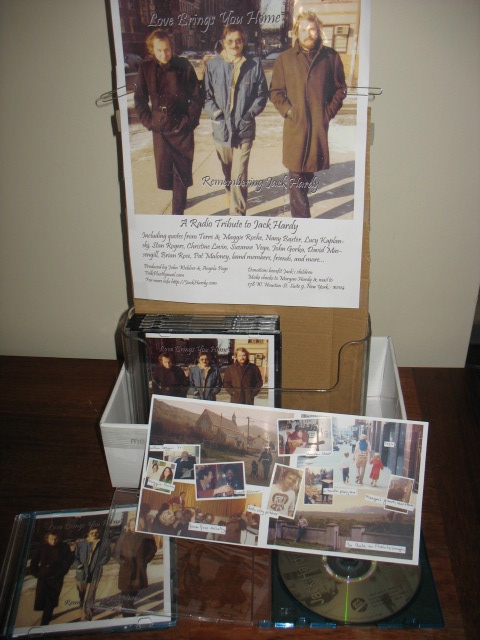 Copies of the 59-minute special Love Brings You Home: Remembering Jack Hardy are available for a donation to Jack's children. Checks may be made out to MORGAN HARDY [Jack's daughter] and mailed c/o 763 Briscoe Road, Swan Lake, New York 12783. [The amount is at the discretion of the donor. The webmaster suggests keeping in mind the costs of the production and shipping, as well as the fact the some of the content of this CD and the accompanying photos are unavailable elsewhere.] For more information, e-mail Angela Page at: folkplus 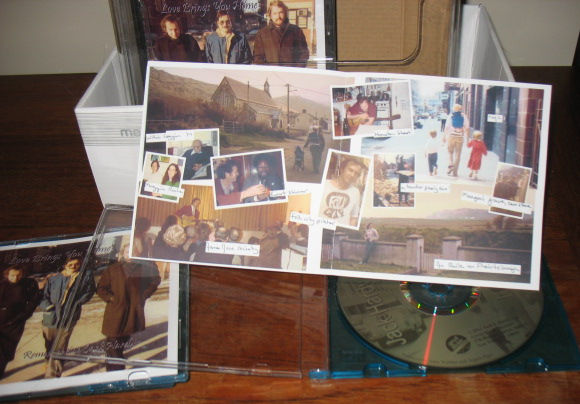 Jack Hardy passed away on March 11, 2011, after a short battle with cancer. We are all mourning his loss and send our most heartfelt condolences to his family and others close to him.

For the time being, links to obituaries and tributes will appear on the main page.

Big Pink Music in South Korea has issued Jack's first seven albums on CD. They are packaged invididually and also as a boxed set containing all seven CDs, plus a bonus CD of ten live performances from the late 1970s and early 1980s (most of songs not previously released).

They are being sold by multiple parties on eBay, Amazon.com, and perhaps other sites. The prices are generally $19.99 for individual CDs and $149.99 for the boxed set.

This is a means to get single CD copies of these albums, which otherwise have only been available in the Collected Works sets. Jack's first, self-titled album is available for the first time on CD exactly as it was on vinyl. (The first CD in the first Collected Works volumes contains some of the same songs and some different ones.)

These issues were authorized by Jack. Lyrics are included on an insert sheet, and the boxed set contains a booklet with photos and newly written commentary by Jack about the albums. The sound quality is exceptional.

The long-term availability of these items is uncertain. Reportedly the eight-CD boxed set is limited to 100 copies.

Kate MacLeod has recorded a cover of Jack's song, "The Inner Man," on her new CD. Her new recording, Blooming, was produced by Tim O'Brien and features Nashville-based musicians Darrell Scott, Byron House, and Kenny Malone. It is available through Waterbug Records at www.waterbug.com and digitally through CD Baby. For more information, see Kate's website, www.katemacleod.com.

Kate is a well-respected fiddle player who has performed with Jack at concerts over the years and contributed to several of his albums, including Omens and Noir. 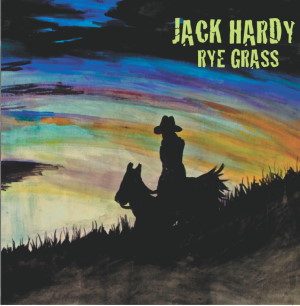 Jack recorded a new album, Rye Grass, in late June of 2009. It will be available for sales at shows and through CD Baby. Contributing musicians include Mike Laureanno on bass, Abbie Gardner and Laurie MacAllister from Red Molly on dobro and banjo and harmonies, and Morgan and Miranda Hardy on fiddle and harmonies.

Folk Brothers CD Due in July

The first album by The Folk Brothers—also known as Jack Hardy and David Massengill—has been recorded and will be out in July. Lyrics and other information will be available at folkbrothers.com.

Christian Bauman's third novel, In Hoboken, includes descriptions of a songwriters' meeting group and a character with a vague resemblance to Jack Hardy. It is published by Melville House Publishing. 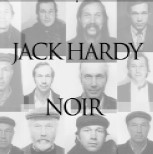 On this CD Jack is accompanied by musicians who have played with him frequently and the performances are outstanding.

MP3 files of the songs may be purchased and downloaded at DigStation.

"Liner Notes" for Noir - The songs and the musicians

Jack has a short article on the Sean Nos Festival in Ireland in the Autumn 2007 issue of Sing Out!.

Reg Meuross's blog includes notes on the four days he spent with Jack Hardy and others at this year's (June 2007) Kerrville festival.

"When Mary Rested on the Rock" on Compilation CD

Jack's song "When Mary Rested on the Rock" is available only on a compilation CD of Christmas-related songs called No Two Flakes the Same. The CD is put out by Penny for the Guy Records. It may be ordered by sending $8.00, which includes postage, to: 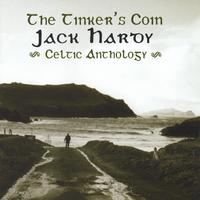 A collection of Jack's Celtic songs is now available on CD.

Coin of the Realm 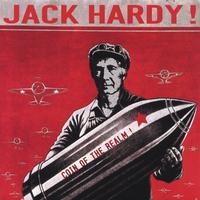 Jack has a recorded a new album, Coin of the Realm: Songs for the New American Century. It is available at his shows or by sending a check or money order for $17 ($15 plus $2 shipping) payable to Jack Hardy to:

"Bandolier" in Sing Out!

Sing Out! magazine features "Bandolier" as one of the songs in their Winter 2004 issue. 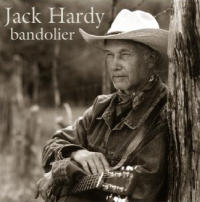 Bandolier is Jack's new album of "western country" songs. (The title song is set in the Mexican Revolution.) The CD was released November 16, 2002, and may be ordered by sending a check or money order for $17 ($15 plus $2 shipping) payable to Jack Hardy to:

The CD will also be available through amazon.com later in December.

Christian Bauman's upcoming novel, The Ice Beneath You, contains two references to Jack Hardy. One is in the novel itself, about three-quarters of the way in. The other is in an interview with the author at the back of the book, in which Jack is cited as a mentor/teacher/influence.

The Ice Beneath You is being published by Simon & Schuster, with a release date of October 2, 2002. 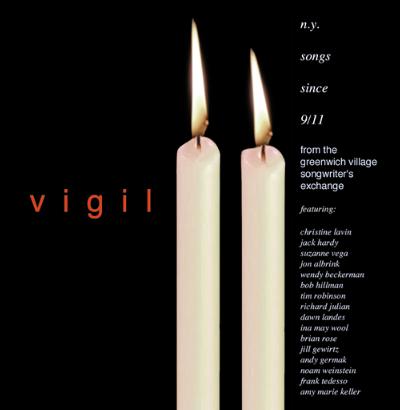 The album may be ordered now from Amazon.com.

Profits from sales of the album will go to the Windows of Hope Family Relief Fund.

The New York Times ran an article on the project on April 21st.

Jack has written a song for his friend Dave Van Ronk, who died February 10th, 2002. Dave was an early supporter of Fast Folk, contributing a song on the very first album.

Jack performed the song during an interview with Otto Bost of WDIY-FM that was recorded on February 12th.

Listen to Jack's introduction and the song:

Thanks to Otto Bost and WDIY (Allentown, Pennsylvania) for the recording.

Smithsonian Folkways will release a two-CD set of songs from the original Fast Folk albums, including Jack's "Forget-Me-Not" from volume 8, number 6.

In addition to the compilation which will receive wide-spread distribution, all of the original albums may now be ordered in digital format as "custom CDs" from Smithsonian Folkways.

Some comments on Suzanne's rendition of "St. Clare":

What Others Are Saying about Omens

See below for more information on the album.

"Eclipse," on Jack's most recent album Omens, will be covered by Steve Gillette & Cindy Mangsen on their forthcoming CD A Sense of Place on the Redwing Music label. The official release date is February 27, 2001.